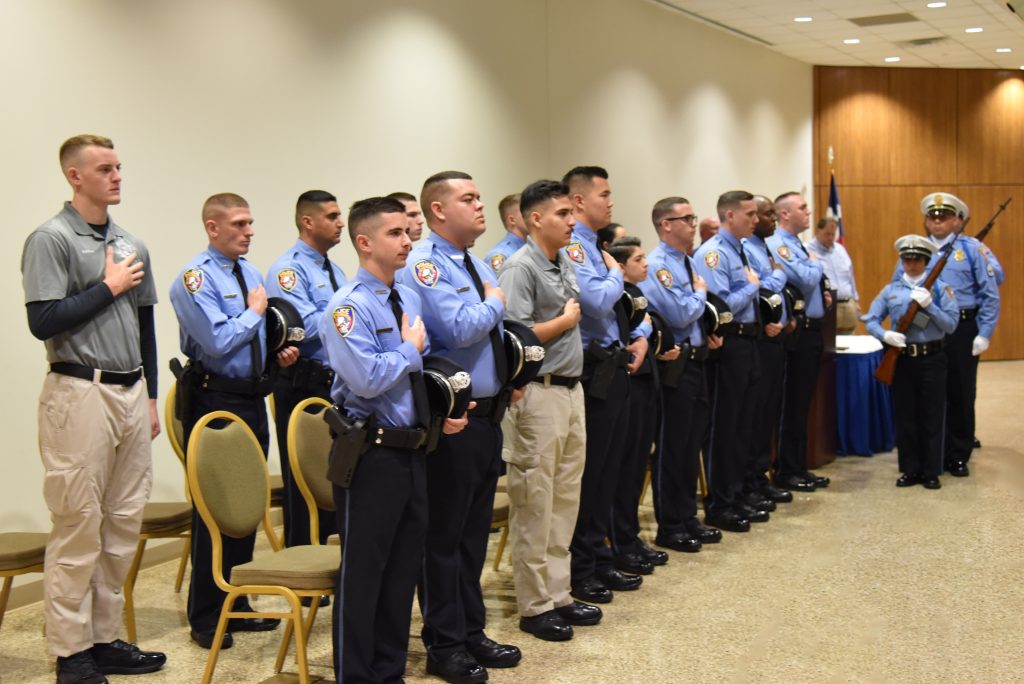 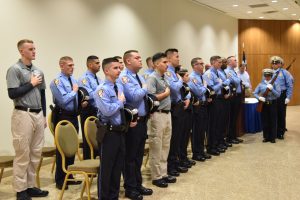 Galveston College celebrated the graduation of its first full-time Law Enforcement Academy cadets Dec. 14 with a crowd of more than 250 family members, friends and law enforcement professionals from throughout the region.

In a processional led by a traditional police bagpiper, the 17 graduates of Class 1 filed into the Abe and Annie Seibel Wing at Galveston College to receive their certifications and to be administered the law enforcement oath of office.

Graduating cadet Matthew Cauley, who was the class valedictorian, spoke on behalf of the class and gave thanks to family members, instructors and Galveston College for the opportunity of attending the academy.

Guest speaker Chief LeeRoy Amador of the Galveston Independent School District Police Department encouraged the graduates to serve by the Golden Rule and to treat those whom they are called to assist the way they want their loved ones to be treated.

A presentation of special awards included the Top Gun award for the best marksmanship on the firing range by cadet Clayton Cole. The top academic achievement award went to cadet Matthew Cauley.

The graduates, all of whom serve with local law enforcement agencies, had a 100 percent pass rate on the Texas Commission on Law Enforcement licensure exam and an overall class average of 95 on 16 examinations throughout the program.

More than 400 cadets have graduated from Galveston College’s part-time Law Enforcement Academy since it began in 1987. Many of those graduates have gone on to join law enforcement agencies in Galveston County, throughout Texas and the Gulf Coast region.

The law enforcement academy is designed for those who are seeking their Texas Commission on Law Enforcement (TCOLE) basic peace officers certification. The 699-hour course of study includes, but is not limited to