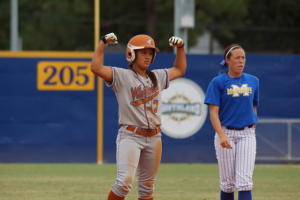 The Whitecaps will take on Odessa College at 9 a.m. on Friday at field 2 in the first round, which will feature teams from throughout Texas and the southern U.S.

Now entering his 20th year at Galveston College, founding softball Head Coach and Athletic Director Ken Delcambre and his assistants have amassed over 700 wins in the past 19 years.

Coach Delcambre has coached 10 NJCAA All-Americans and four NFCA All-Americans, and three of his former players represented their countries’ national teams in the 2008 Olympics in Beijing, China.

In 2002, Coach Delcambre and his staff were awarded with the NFCA Regional Coaching Staff of the Year award.

Coach Delcambre says he has high expectations for his team this year.

“The returning players have made great strides since joining the team last year, and the incoming freshmen have added speed, power and command to the well-balanced sophomore group,” he said. “I fully expect the team to make it to the regional tournament again this year, and I believe they are very capable of making a run for the national title.”

Galveston College competes as a member of the NJCAA and sponsors two intercollegiate athletic teams, including softball and baseball.