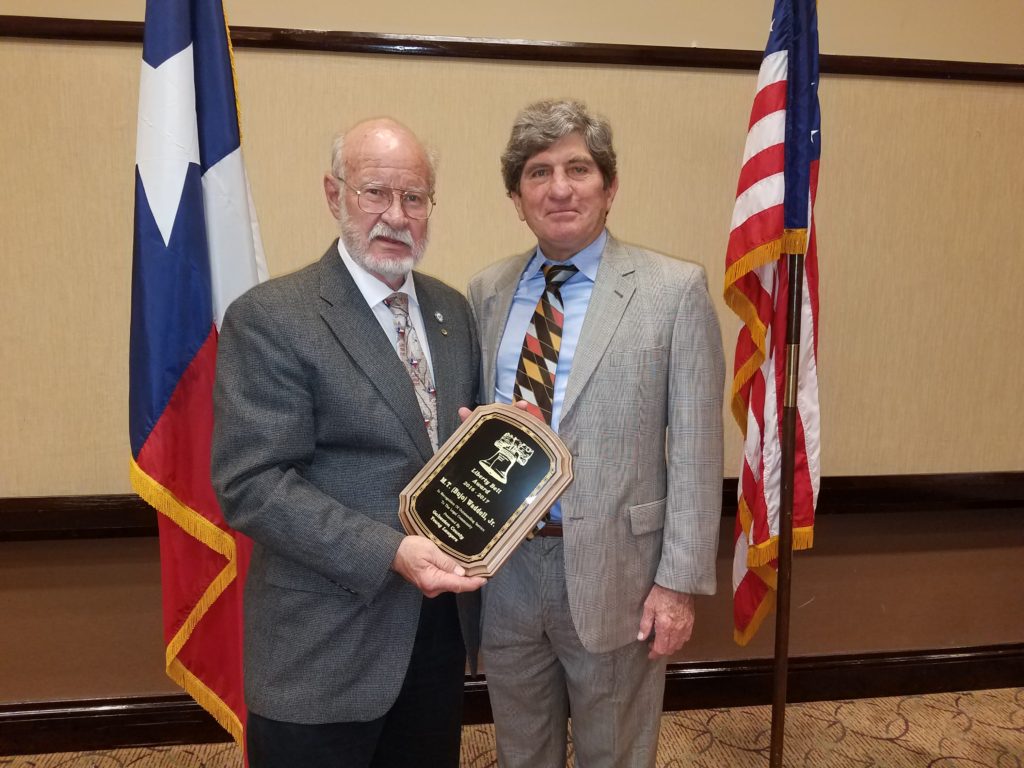 Galveston College sage faculty member Theron “Bujo” Waddell was recently presented the Liberty Bell  Award by the Galveston County Young Lawyer’s Association. The award is presented to persons who have consistently contributed to the well-being of their community.

Waddell began his involvement with community service and politics at an early age. His parents, M.T. (Bebo) Waddell and his wife, Noodie Waddell, were founding members and officers of the Bayshore Rod, Reel, and Gun Club, an organization dedicated to protecting Galveston Bay from the ravages of shell dredging, wholesale pollution by municipalities, and harmful fishing and oyster harvesting.

Bujo, at the age of 14, assumed the role of editing and publishing the club’s monthly newsletter, The Conservationist. That involvement led to his agreeing to take on the task of managing the East Harris County political campaign for a candidate for the Texas House of Representatives at the age of 15. That candidate, Criss Cole, won his primary nomination race and went to have a distinguished career in both the Texas House and Texas Senate.

Bujo attended R.E. Lee High School, Lee College, the University of Colorado, and earned his BA and MA degrees in government and history from the University of Texas in Austin. While working on his master’s degree in government, he became the first administrative aide ever employed in the Texas Senate for Senator Criss Cole.

Bujo began his college teaching career in 1963 at Sam Houston State University in Huntsville three and one-half months short of his twenty-second birthday.

When the federal district court in 1964 ordered the redistricting of Texas legislative districts, Bujo interrupted his teaching career to return to the Texas Senate to assist Sen. Cole in the redistricting effort. Since Senator Cole had been blinded in the first amphibious landing in the Pacific campaign, he needed assistance he could trust to help redistrict Harris County.

Two years later, Bujo decided to work on this doctorate at the University of Texas and also worked for State Senator Chet Brooks while also working full-time on his PhD course work.

After teaching for two years at San Jacinto College, Bujo accepted the position as Chairperson of the Social Sciences Department at Galveston College in 1969. In May he will have completed 48 years at Galveston College. In those years, he has served as a Department Chair of Social Sciences, as Acting Assistant Dean of Arts and Humanities, Acting Director of Student Activities, Special Assistant to the President for Policy Research, and Director of Arts and Humanities. But through all the years, his main task has been as a Professor of Government and History, seeking to inspire his students to become active in their community and politics.

Bujo and his wife, Jeri Jaquis, are active in a number of civic groups. Among their endeavors have been the Galveston County Democratic Party, which Bujo was the Chair for ten years, First Presbyterian Church, where both are ordained Elders, the Grand Opera House, where they regularly serve as ushers, and as co-chairs of the Water Station Committee for the D’Feet Breast Cancer Walk/Run.