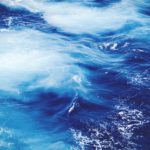 Update 8/29/17 at 6pm: Galveston College will be closed through Monday September 4, 2017. The College will reopen on Tuesday September 5, 2017 for the first day of classes for the Fall Semester. Registration is still available online and the registration will continue all week long after the College reopens. 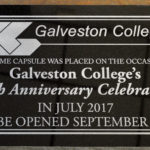 Pictured is the time capsule monument to be placed atop the time capsule burial site for the conclusion of Galveston College’s 50th anniversary taking place with all faculty and staff at the number one community college in Texas on August 18, 2017. 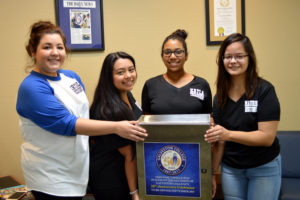 Galveston College’s new Student Government Officers for 2017-2018 are pictured holding the 50th Anniversary time capsule that will be buried on the College Main Campus during General Assembly on August 18, 2017 and dug up during the 100th anniversary in 2067. Pictured from left to right are Student Government Officers Crystal Cruz, Vice-President; Jasmine Pizano, Secretary; Kayla DeLeon, Treasurer and Maurissa Pena, Historian. 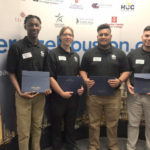