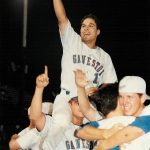 Twenty-five years ago, the Galveston College Whitecaps baseball team ascended to the pinnacle of athletic success by winning the 1994 National Junior College Athletic Association Division I title in only its third year of intercollegiate athletic competition.

On Thursday, April 25, the current Whitecaps team, coaches and fans will honor the 1994 Junior College World Series champs at “Turn Back the Clock Day” prior to the 4 p.m. doubleheader with the San Jacinto College Gators at Bernard Davis Field, 81st Street and Frank Guisti Drive, Galveston

The Whitecaps will wear throwback uniforms, and there will be a bounce house for the kids, free popcorn, music and fun. The games are free and open to the public.

In June 1994, the Whitecaps took the field in the NJCAA World Series in Grand Junction, Colorado, determined to improve on their third-place finish of the previous year. The team responded remarkably to the pressures of the series competition, winning six of seven games to take the coveted crown and finish the season with 54 wins against only 14 defeats.

Inspiration and determined leadership were the hallmark of head Coach Dick Smith, who led his players in baseball fundamentals and ignited their desire to excel both individually and as a team. For his superior efforts, Coach Smith was honored as NJCAA and ABCA coach of the year in 1994.

Dr. Marc Nigliazzo, president of Galveston College in 1994 and founder of the Whitecaps baseball program, said at the time the team’s championship in only its third year of competition far exceeded his original expectations. He said his primary goal was to provide “an opportunity for 30 to 40 kids to compete in intercollegiate athletics and to receive a good education. The rest was gravy.”

This exemplary group of men and their coaches has been a tremendous source of pride for the Whitecaps athletic program, student-athletes, coaches, students, faculty and staff of Galveston College and their many fans in the community for a quarter of a century. Their exceptional accomplishments have rightfully earned them honors from the city of Galveston, Galveston County and the state of Texas.

In recognition of the 25th anniversary of Galveston College winning the national championship, the Whitecaps are proud to play Thursday in honor of the 1994 NJCAA World Series champions.