The Student Activities office at Galveston College will present “Active Shooter Response Training” on Tuesday, Nov. 12, from 3-4 p.m. in Room 321 of the Fine Arts Building on the main campus. Sergeant Marcus Alfred with the Galveston County Sheriff’s Office will provide information, resources and tools to assist students, faculty and staff in becoming better prepared for incidents such as an active shooter. 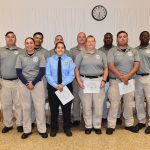 Graduating cadet Eric Vela, who was the class valedictorian, spoke on behalf of the class and gave thanks to family members, instructors and Galveston College for the opportunity of attending the academy.

Chief Vernon Hale of the Galveston Police Department spoke as a representative of the law enforcement community and welcomed the graduates to the ranks of law enforcement service.

Graduating cadet Eric Vela spoke on behalf of the class and gave thanks to family members, instructors and Galveston College for the opportunity of attending the academy.

A presentation of special awards included the Top Gun award for the best marksmanship on the firing range by cadet Paulino Cisneros. The top academic achievement award went to Eric Vela.

Students also can visit the office in Room 323 of the Mary Moody Northen Center on the Galveston College campus, 4015 Avenue Q, Galveston, Texas, or online at www.gc.edu/programs-and-courses/criminal-justice-law-enforcement/.