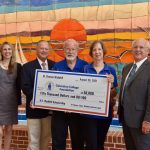 Longtime Galveston College professor Theron Waddell is thankful for the experiences he had as a college student and the influence his college professors had on his decision to pursue a career in education.

To show his appreciation for the “gifts” his professors gave to him and the impact his 50-year career at Galveston College had in his life, Waddell and his wife, Jeri Jaquis, established the M.T. Waddell Scholarship with the Galveston College Foundation to provide support for future students majoring in social or behavioral sciences for which there are teaching opportunities at the high school or college level.

“I had students whose mothers, fathers, brothers and sisters were in my classes,” Theron said. “Former students come up to me at the grocery store, the pharmacy and other places in the community. They’ll say, ‘Do you remember me?’ Most of the time, I do.”

The Waddells said they became interested in endowing a scholarship at Galveston College because so few students consider careers in teaching social sciences, which include disciplines such as history, political science, psychology and sociology among others. They were also troubled by the lack of scholarships for students who wanted to pursue careers in teaching.

Theron began his professional career as the first full-time administrative assistant in the Texas Senate from 1963 to 1967, working for Senator Criss Cole, Senator Chet Brooks and the Senate Interim Committee on Vocational-Technical Education. While there, he authored a report titled “To Bridge the Gap,” which resulted in legislation that laid the foundation for career-technical education in Texas as it stands today.

After serving as an instructor of government at Sam Houston State University, Houston Baptist College, San Antonio College and San Jacinto College, he began his career at Galveston College on September 1, 1969, as professor of government.

From 1969 to 1984 and 2002 to 2004, he chaired the Social Sciences department at Galveston College. He also served as special assistant to the president for policy research and writing for six years, acting assistant dean of the Humanities division for two years, acting director of Student Services a year, and director of the Arts and Humanities division for seven years.

He served on the adjunct faculty of Texas A&M University at Galveston for 20 years and as an adjunct professor at the University of Houston-Clear Lake. For 10 years, he chaired the Galveston County Democratic Party. He also served as the legislative chair and vice president and program chair of the Texas Government Section of the Texas Community College Teachers Association.

“I had decided to go back to college in the summer of 2004 and so of course I had to start all over again with my basics at Galveston College. That summer I took government from Professor Waddell and it was one of the most interesting classes that I ever had. I was majoring in history at the time, so the class offered me a lot of new information that I hadn’t learned before in high school,” Wilson said.

“He was always so thoughtful and amusing, to me; however, he was stern and was a tell-it-like-it-is teacher that I’m sure has had his footprint on a lot of people’s lives throughout his 50-year teaching career.

“As a current member of the Galveston College Foundation Board of Directors, the scholarship established by someone who meant so much to our community and this college is one that I’m sure will help those students who want to do better and do more in their own way. By establishing this scholarship it’ll help the board continue its mission, too, to help students obtain their degree.”

Jeri and Theron met at Moody Memorial United Methodist Church while performing in the chorus for Handel’s Messiah. They have been married for 36 years.

Although they are retired, the Waddells stay busy volunteering in the community. They have served as volunteer ushers at The Grand 1894 Opera House since 2005, and they volunteered with Dickens on The Strand for more than 20 years.

“For me, this scholarship is all about student success,” Jeri said. “The very first day we volunteered at the clinic in Texas City, a former nursing student of mine from Galveston College walked up to me and asked me if I recognized her. I enjoy seeing my former students working at various places in the community and hearing their success stories.”

Jeri is also chairing the American Heritage Committee for the George Washington Chapter of the National Society Daughters of the American Revolution. The couple have been riding in organized bike rides since 1987.

“Throughout their lives, Theron and Jeri have inspired students to ensure their success and encouraged them to fulfill their potential. We are deeply grateful for their tremendous generosity in supporting our students and helping to remove financial barriers for those who are considering careers as teachers,” said Dr. Myles Shelton, Galveston College president.

“Galveston College is blessed to have benefactors such as Professor Theron Waddell and Jeri Jaquis,” said Keith McFatridge, Galveston College Foundation chair. “Their scholarship will make it possible for so very many students to succeed in the future. We greatly appreciate their generous donation making it possible for so many future Galveston college students to obtain their education.”