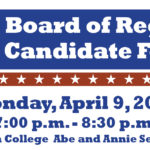 The forum will be moderated by Don Davison, Galveston College Faculty Senate president and professor of business/accounting.

Citizens are invited to email questions for the candidates, in advance, to Davison at ddavison@gc.edu. Audience members also will have an opportunity to submit questions to the candidates during the forum.

“Throughout its over 50-year history, Galveston College has been host to numerous political forums,” Davison said. “These forums have allowed candidates to express their platforms while at the same time giving the community the opportunity to meet and know the candidates better. As a community college, we believe forums are an essential part of the democratic process and as such are a key component of our mission to serve the community of Galveston.”

For more information, contact Don Davison at ddavison@gc.edu or the Galveston College Public Affairs office at (409) 944-1302 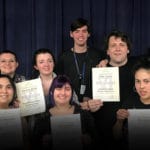 At the regional festival, the Galveston College students participated in the on-site devised initiative. This consisted of working with students from other colleges under the supervision of Alyssa Hughlett from the Dell’Arte International School of Physical Theatre to create an original devised performance based on the prompt, “She/He/They Never Met a Stranger.” Eva Arita, Alyssa Gudz, Tyler Hanna, Gabrielle Hosler, Jade Killebrew and Eric Scales each received a KCACTF “Festival Developed Devised Performance Award” and Destiny Shute received the KCACTF “Devised Theatre Student Excellence Award.”

Students Melina Moore and Destiny Shute performed one scene and a monologue for the Irene Ryan acting competition. Moore was chosen as the Irene Ryan Acting Nominee Award Recipient from the GC Theatre Department’s fall production of “It’s A Wonderful Life.” She was also cast for a role in the play “15” by Claire Fountain and performed in the Ten-Minute Play Festival.

In addition, the students attended six plays, musical theatre presentations, staged play readings and at least three workshops a day on various topics including acting, playwriting, directing and various technical topics. Galveston College also sponsored the Design and Technology Breakfast for all participants at the festival.
About KCACTF
The Kennedy Center American College Theater Festival (KCACTF) Region VI Theatre Festival includes colleges and universities within Texas, Louisiana, New Mexico, Oklahoma, Arkansas and Missouri. The KCACTF is a national organization that exists to celebrate the educational and creative process of university and college theatre. KCACTF promotes professional standards and provides students and faculty with opportunities to bridge the academic and professional worlds. KCACTF honors achievements in diversity and excellence and encourages experiences in all areas of theatre.
###