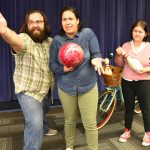 The Galveston College Theatre department will return to the stage this fall for a three-day run of “More Fun than Bowling,” a funny and eccentrically philosophical comedy by veteran playwright Steven Dietz.

Doors open 30 minutes prior to curtain and admission is free.

The story follows Jake Tomlinson as he relives moments of his life with his two dead wives, Lois and Loretta, both of whom died in freak bowling accidents.

Main character Jake owns the bowling alley in a small Midwestern town and passes the time ruminating about life while sitting on a hilltop where two of his three wives are buried. Lois was zapped by lightning while carrying a bowling trophy in a thunderstorm, and Loretta was killed by only the second bowling ball rack collapse in history. In his younger days Jake was a promising concert musician, but a foul tip baseball broke his fingers which subsequently healed into a perfect bowler’s grip. Jake replays the key frames of his life and, from time to time, is visited by his daughter Molly who has become adept at talking women into marrying her father for love and free lane time. But who is that nattily dressed man with dark glasses and a revolver lurking nearby?

The Washington Times describes “More Fun than Bowling” as “a very funny and eccentrically philosophical comedy. Mr. Dietz is a…writer with a distinct comic voice. He shows us that life and certainly death is a lot like bowling. For every experience, there seems to be an appropriate bowling expression just waiting to be applied. And for those who thought that bowling was merely a matter of rolling a ball and knocking down some pins, there is an Act II description of the Zen of bowling that will change your thinking forever…. In addition to inventing vivid cartoonish characters and giving them wacky tragic actions, Mr. Dietz is a master of the comic monologue.”

This production of “More Fun than Bowling” is entered as a participating production in the Kennedy Center American College Theatre Festival, a national theater program involving 20,000 students from colleges and universities nationwide annually. It is presented by special arrangement with Samuel French, Inc., a Concord Theatricals Company.

Daniel Bourque, Eva Arita and Alyssa Gudz rehearse for the upcoming Galveston College Theatre production of “More Fun than Bowling” by Steven Dietz. Show dates and times are Thursday, Oct. 17, at 7:30 p.m., Friday, Oct. 18, at 2:30 p.m. and 7:30 p.m., and Saturday, Oct. 19, at 7:30 p.m. Performances are located in Room 207 on the second floor of the Galveston College Fine Arts Building. Doors open 30 minutes prior to curtain and admission is free.