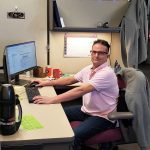 Last August, Galveston College student Jason Nichols, of Galveston, set a goal to earn a Level One Medical Coding Certificate. He realized this would mean registering for 15 rigorous credit hours each semester and that those classes were only offered in the evening. He worked as an Office Depot sales consultant during the day and then transformed into a Galveston College student as the sun began to set. He attended class two to three nights weekly for two semesters.
Some nights Nichols took two consecutive classes, beginning at 5:30 p.m., and remained in the class until the second class ended after 9 p.m. Not only did he successfully earn 15 credit hours each semester, he did it with excellence and was placed on the Vice President’s List two consecutive semesters with a 3.6 grade-point average.
As Nichols worked to complete requirements for the second semester, he set a second goal to prepare and take the American Association of Professional Coders (AAPC) certification exam. He took the Certified Professional Coder (CPC) exam and passed the challenging test in May 2019. With these two major accomplishments under his belt, he created a resume and applied for a medical coding position at the University of Texas Medical Branch (UTMB) in Galveston.
Nichols was selected for the position and is currently employed as a revenue cycle coder at UTMB. His professor, Donna Swartz, said Nichols made himself a very strong candidate by earning the certificate and coupling it with passing the AAPC CPC exam.
Nichols is currently coding for community-based family medicine and general practice outpatient clinics and has found the work extremely interesting and rewarding. He was recently elected secretary of the Galveston chapter of the AAPC.