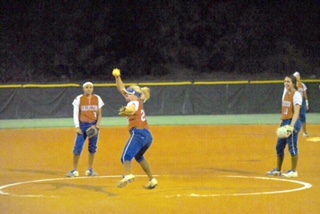 The opening game of the 2018 National Junior College Athletic Association Division I Softball Championship did not go as planned for 10th-seeded Galveston College, as the Whitecaps fought hard but came up short against seventh-seeded Eastern Arizona College at the Canyons Softball Complex in St. George, Utah.

Opening strong, the 35-10 Whitecaps had an early one-run lead before the 53-10 Gila Monsters pulled ahead to earn a 5-1 come-from-behind victory.

Eastern Arizona’s Kendall Rauk allowed just one run on four hits on her way to recording a complete-game victory, while Sala Pedebone paced the Gila Monsters at the plate by going 1-for-2 with two runs driven home and a homer.

Kayla Shaw led the Whitecaps by going 2-for-3.

The Whitecaps will take on Central Alabama College today at 6 p.m. CST.   The game will  stream live on Galveston College’s Facebook page.