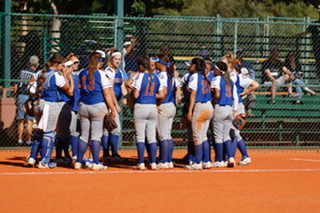 Central Alabama’s Amber Parker struck out five and allowed just one unearned run on three hits en route to leading the 15th-seeded Trojans to an 8-1 victory over No. 10 Galveston.

CACC’s offense also shined in the ballgame by driving home two in the first, three in the second and three more in the fifth to put the ballgame away.

Ashton Fielding paced the Trojans at the plate by going 3-for-4 with three RBIs and a run scored, while Sierra Easterwood went 1-for-4 with a second-inning three-run home run.

Amber Parker earned the win for Central Alabama . She surrendered one run on three hits over seven innings, striking out five.

Anahi Hoover led Galveston by going 2-for-3 with the Whitecaps’ lone RBI of the afternoon.

Galveston pitcher Ashley Kriesel had a solid game with a total of 10 strikeouts over five and a half innings.

Central Alabama  saw the ball well, racking up seven hits in the game.  Fielding led the Trojans with three hits in four at bats.

Congratulations to Whitecaps sophomores and graduates who are moving on to four-year universities and to the entire team in a great season, which included being named NJCAA Region XIV champions.