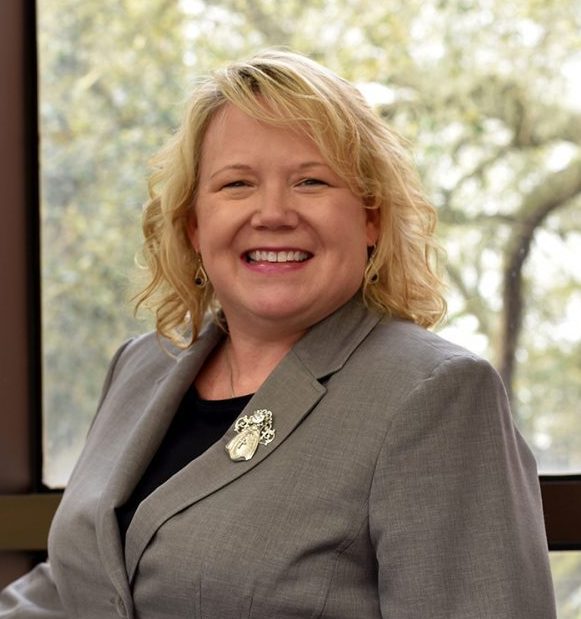 Dr. Matthews began her involvement with the TWHE Board of Directors in 2012 and served as president from 2016 to 2018. She has served on a number of TWHE’s committees, including the Nominating Committee, Institutional Representative Committee, Awards Committee and Social Media Committee.

“From the list of positions she has held, anyone could surmise that Cissy has been a positive force for TWHE. Although her positions outline Cissy’s time with TWHE, they do not adequately describe the true impact she has had on the organization,” said Dr. Dani Day, immediate past president of TWHE, in presenting the award.

“True leaders focus on a vision and lead others to join them in implementing that vision. Cissy has done just that with both her board positions—especially her leadership as president and continued influence as past president. The vision of TWHE is to ‘transform higher education leadership in Texas and beyond,’” Dr. Day said.

“Through her focus on that vision, Cissy has led TWHE to plan its work to achieve the vision through strategic priorities related to development, networking, advocacy, advancement and professional growth of women in Texas colleges and universities.”

Through her statewide leadership of TWHE, Dr. Matthews worked to promote the American Council on Education’s Moving the Needle: Advancing Women in Higher Education Leadership initiative. Additionally, she worked to diversify the membership and participation of women from all sectors of higher education in TWHE.

“I would like to extend my sincere congratulations to Dr. Matthews on this tremendous honor,” said Dr. Myles Shelton, college president. “We are extremely fortunate to have such an outstanding leader here at Galveston College.”

Dr. Matthews has more than 20 years of experience in higher education. She joined Galveston College as the vice president of instruction in 2012 and has been instrumental in creating several new instructional programs, including the college’s first bachelor’s degree.

Prior to joining the Galveston College leadership team, she was the dean for workforce and continuing education at College of the Mainland in Texas City.

She and her husband, Dave, are the parents of one son, Travis. They reside in Friendswood.